A Weekend in Coimbra

Coimbra is a small city about 200km north of Lisbon. It’s easy to get there on the train, a ride that takes a little over two hours. We found a taxi to our guest house, dropped off our bags, and walked down into the old city at the center. Before we left, we spent some time admiring the home across the street from the guest house. (A note on names – if the word “Alta” is in the name of the place you’re going to stay, you are probably on top of a hill and will spend a lot of time walking up when you just want to go to bed.) 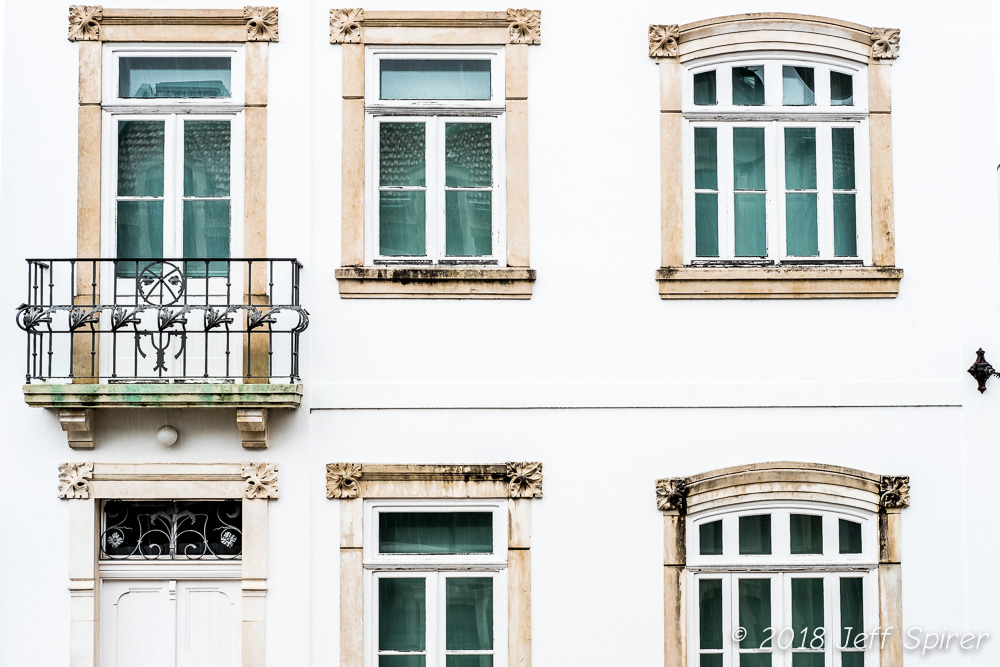 One of Coimbra’s best-known landmarks is the University, founded in 1290, the oldest in Portugal. Still active today, the University has an old world feel despite students with laptops and mobile phones. Most visitors head to the Library first. The entry leads into the prison underneath the library itself. This is a bit special, as universities aren’t known for housing prisons. Apparently in medieval times, the University had its own legal jurisdiction and could toss miscreants into prison. Not like the colleges I went to. 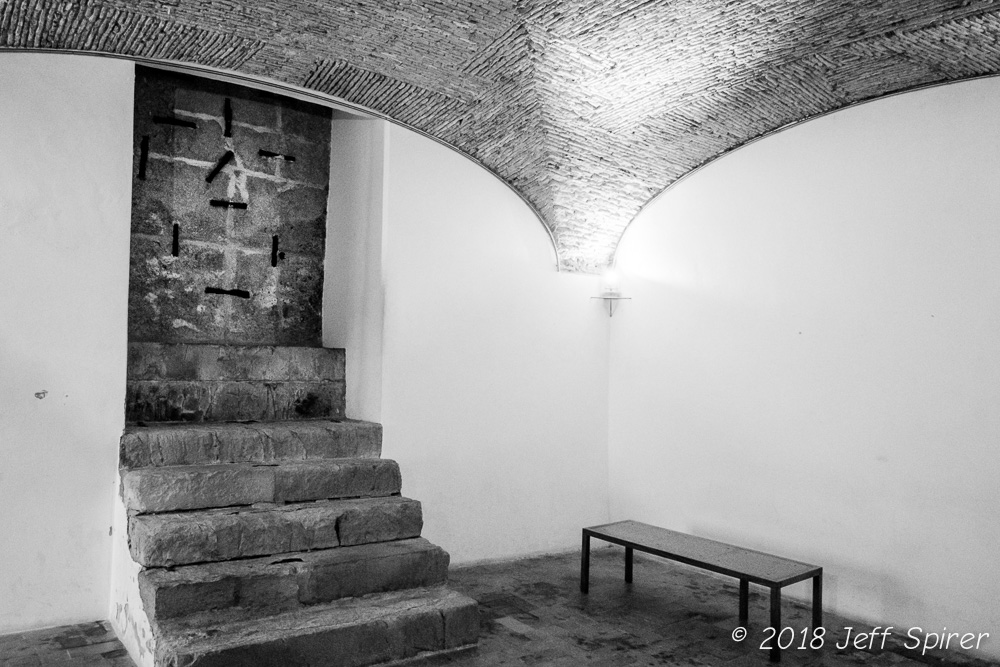 Above the prison, there is a room with lots of books and a Moorish feel. The ceilings are very similar to one seen in North Africa and in places where the Moors invaded. While the architecture was a surprise, the books weren’t. 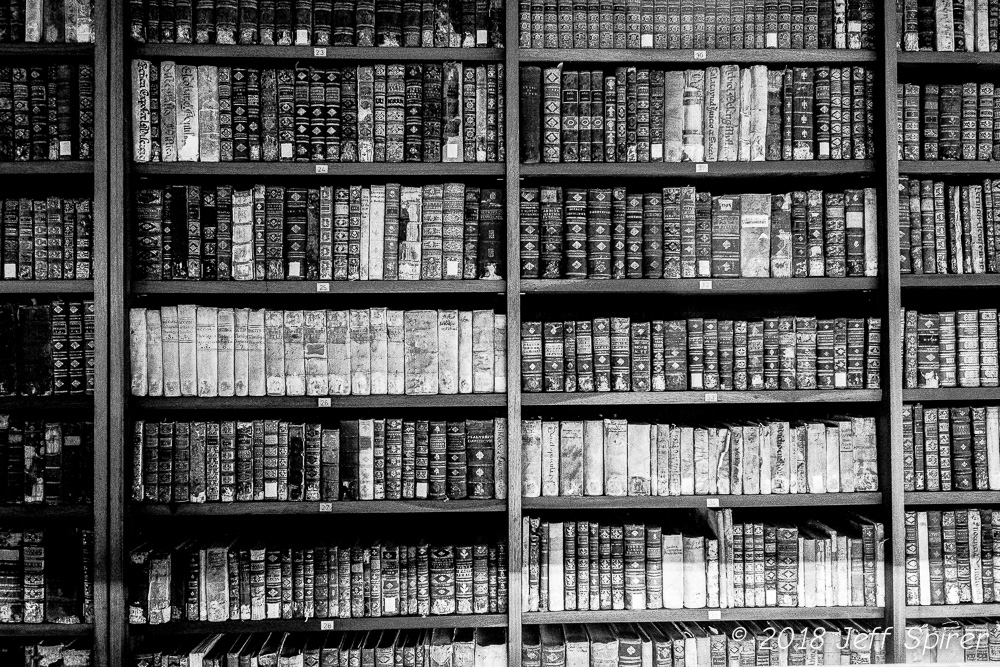 The spectacular part of the library was another floor up. It’s hard to describe and photography was not allowed. At a minimum, it is the creepiest and most gothic library imaginable. It feels like a bad dream, a truly amazing and unique experience. I am going to look into getting permission to photograph but suspect it will be difficult.

There’s a lot of religious imagery around the University, even in buildings that may not have been part of the school. Of course the church was the government when it was built so that’s not surprising. There are also places in which the effort that went into building was almost incomprehensible given the tools of the day. 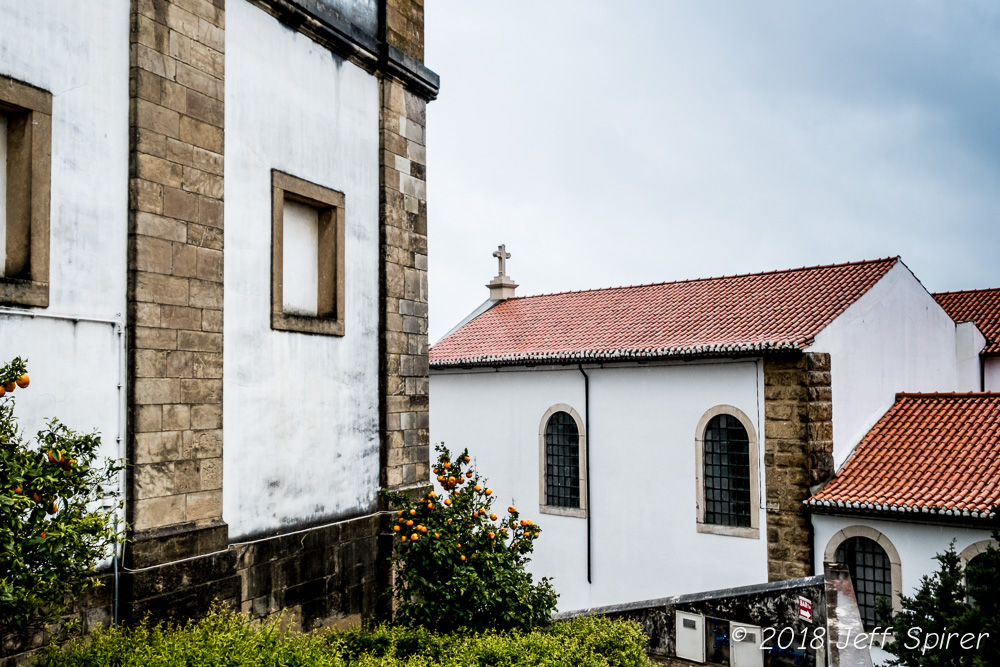 And the buildings themselves were impressive, even afflicted with the overcast wet weather that we suffered much of the time we were in Coimbra. 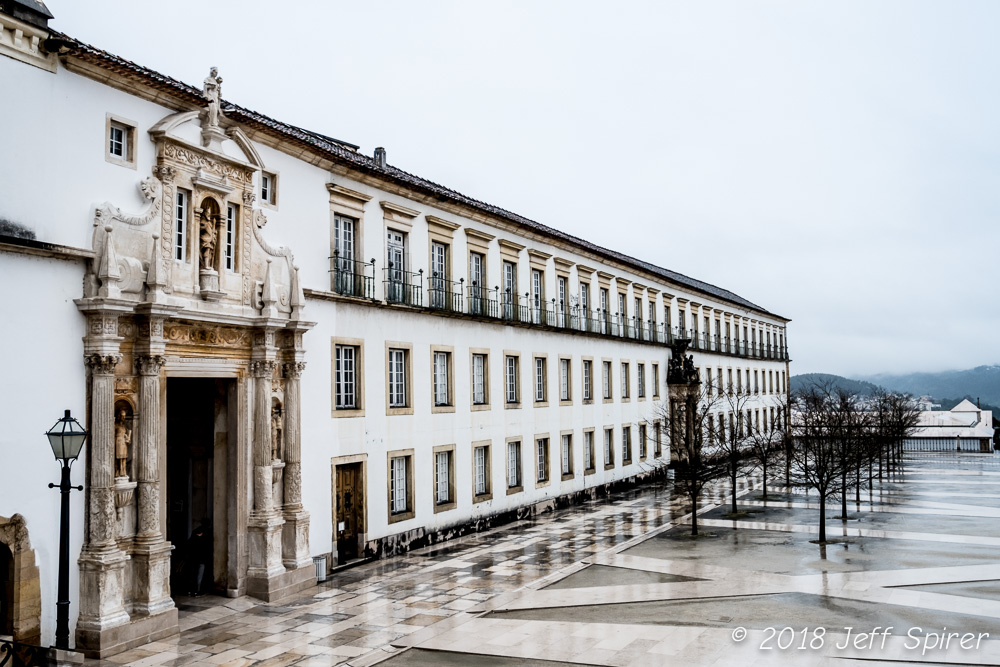 When it did brighten up and the blue skies appeared, the city was beautiful. 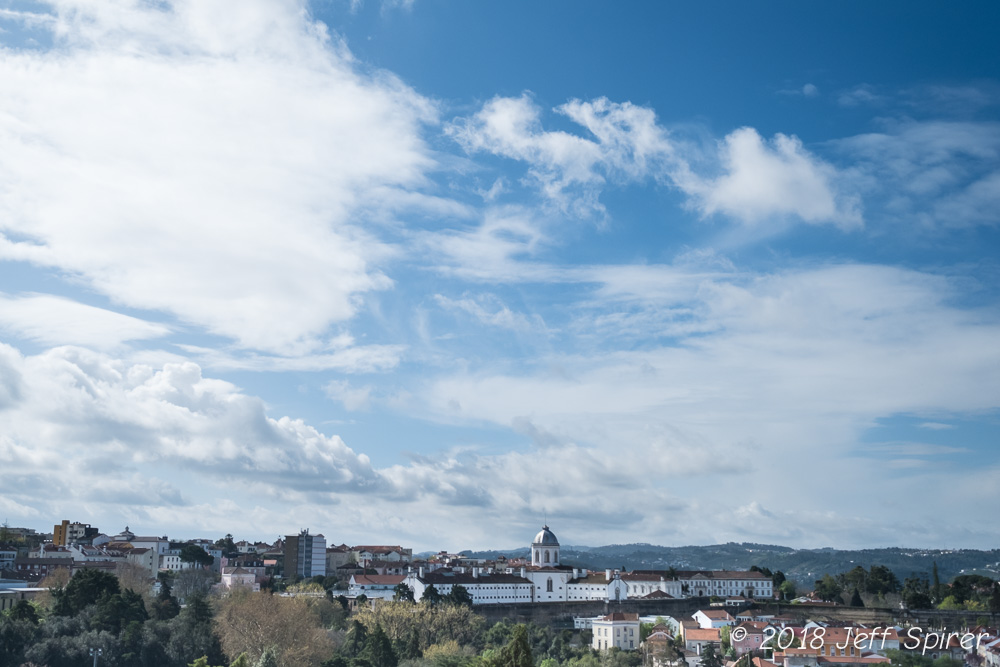 The next day, we visited a famous monastery. As expected, lots of religious imagery, some with incredible complexity. And some just strange. Here’s a slideshow: 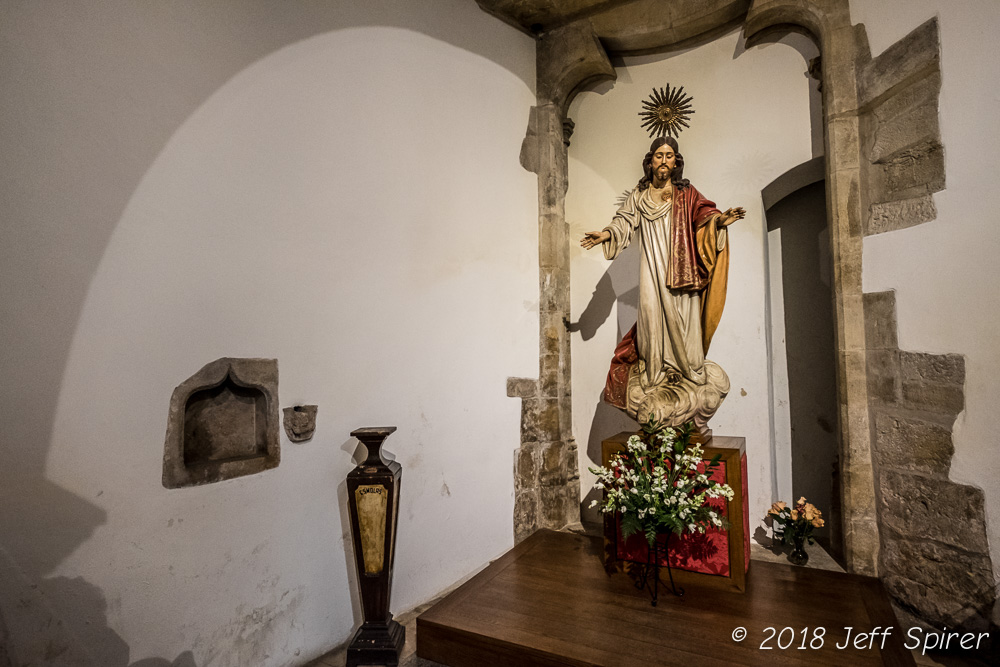 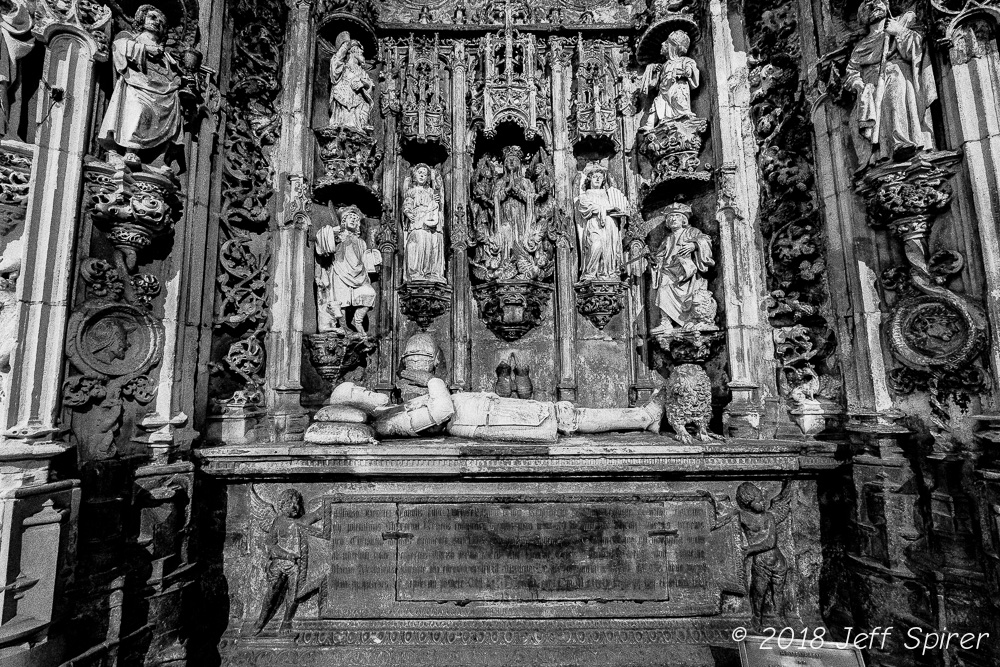 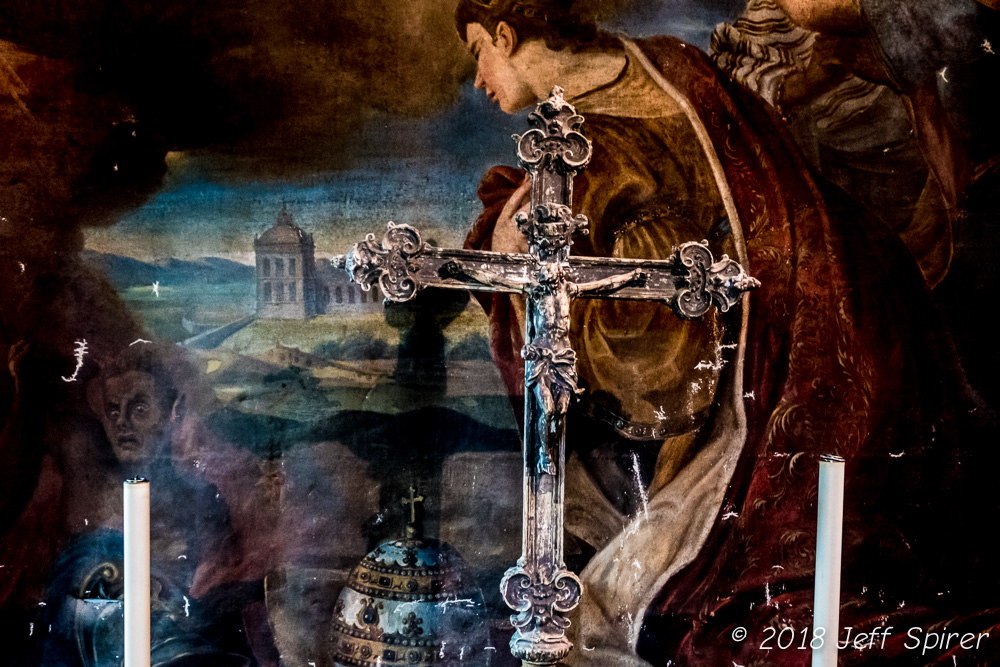 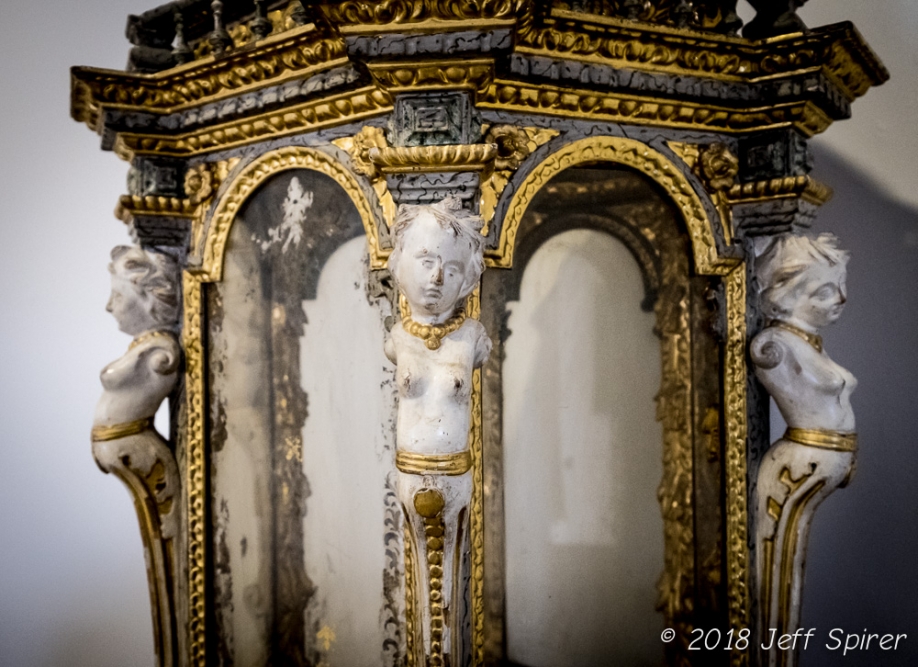 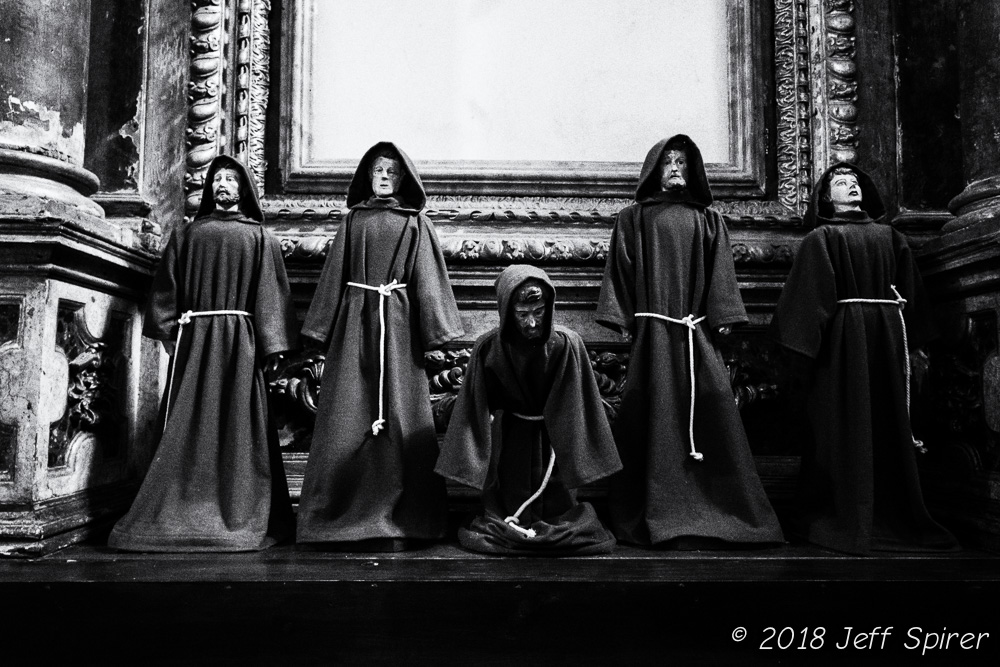 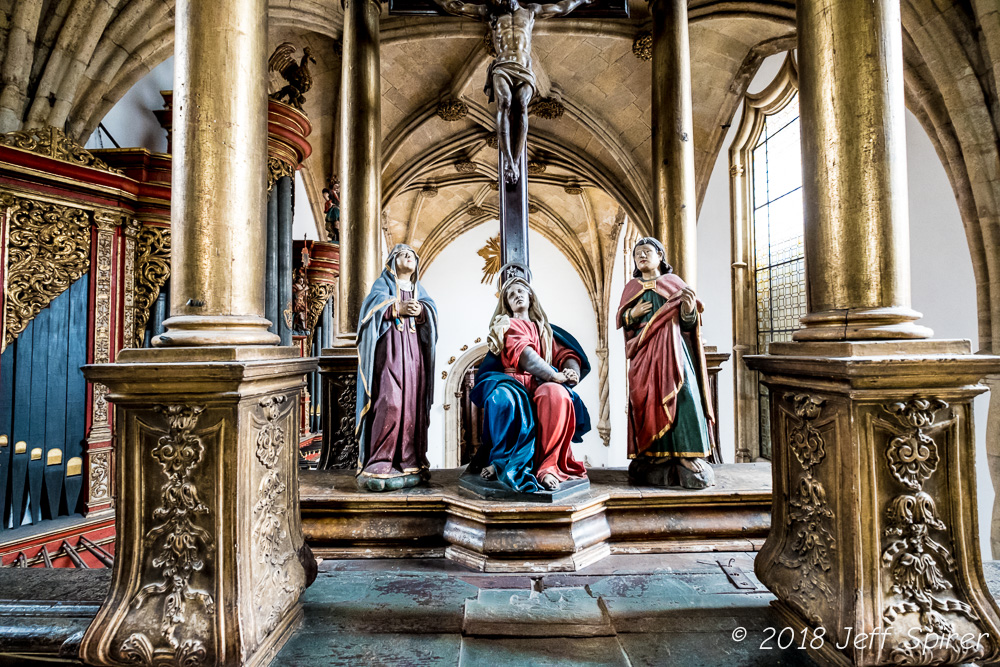 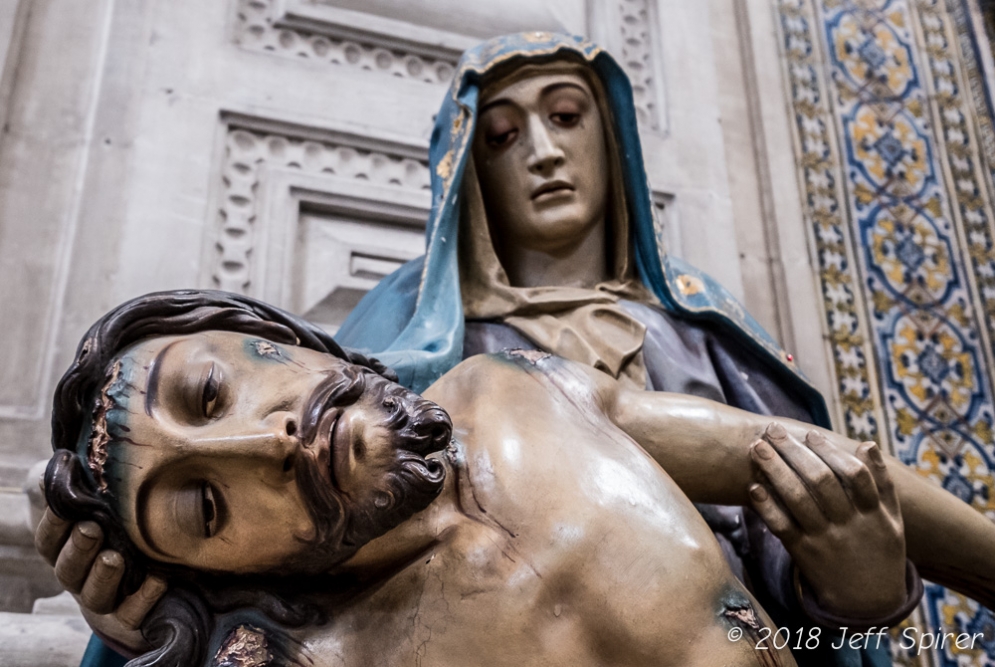 Out and about, Coimbra is a Portuguese city, similar to Lisbon in many respects although much smaller. Old and new, places that people could gather, cafes as the center of social life. The old city was dominated by tourists and students but due to heavy rain, occasionally emptied, sometimes the plaza just had one person in it. 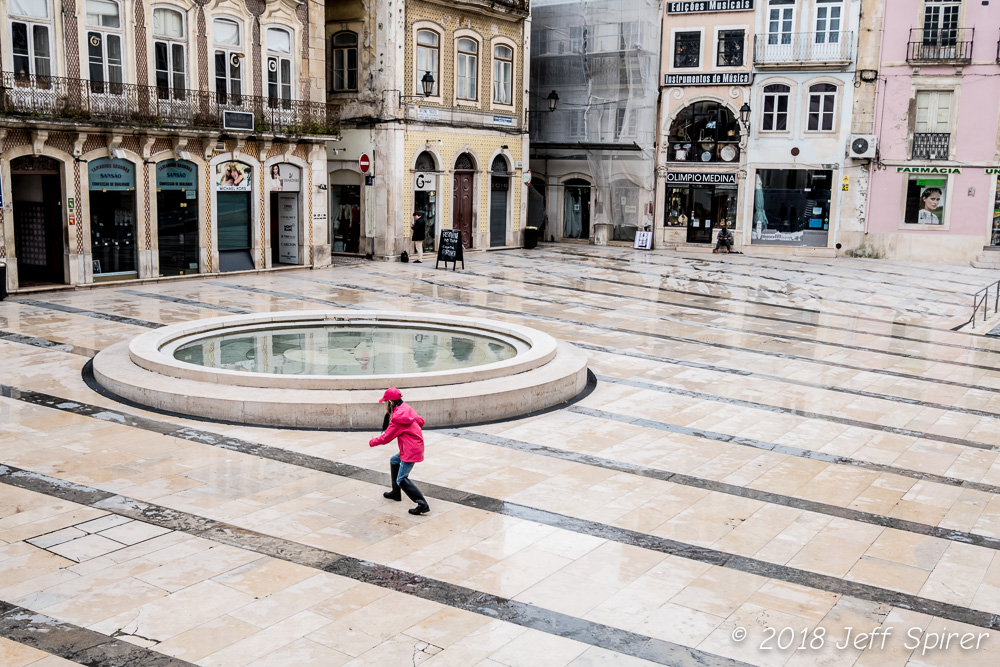 We walked at least 10km a day and saw some interesting neighborhoods. On a residential street, three very well-kept houses had a cryptic sculpture in the parking lot in front. 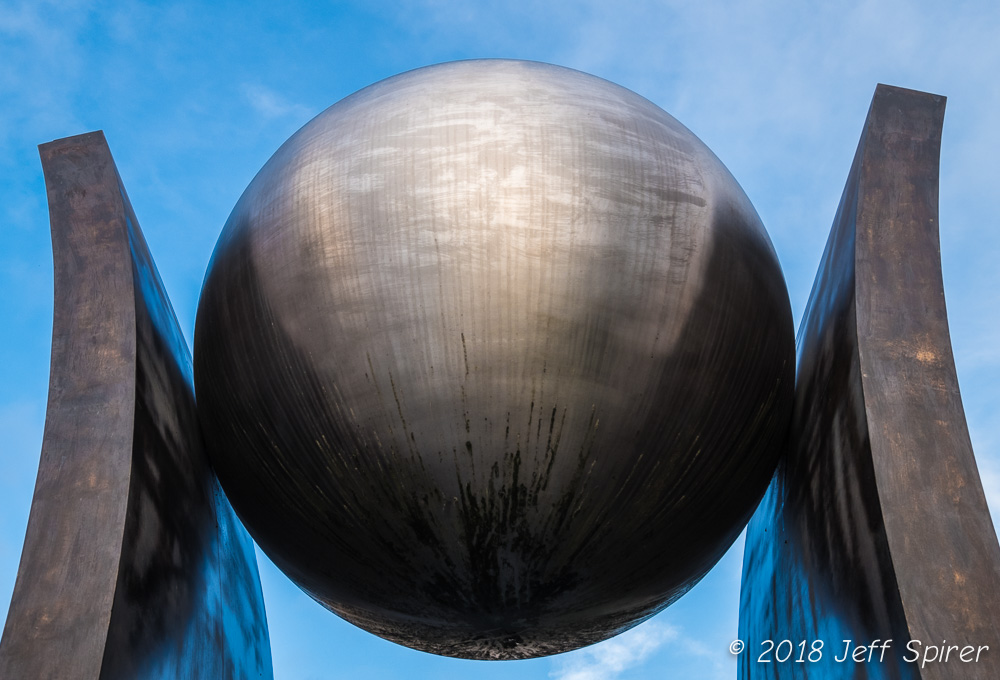 At night, Coimbra’s pedestrian streets are probably busy at most times, but the rain made it more difficult to be out. It did make the street shiny for photographs. 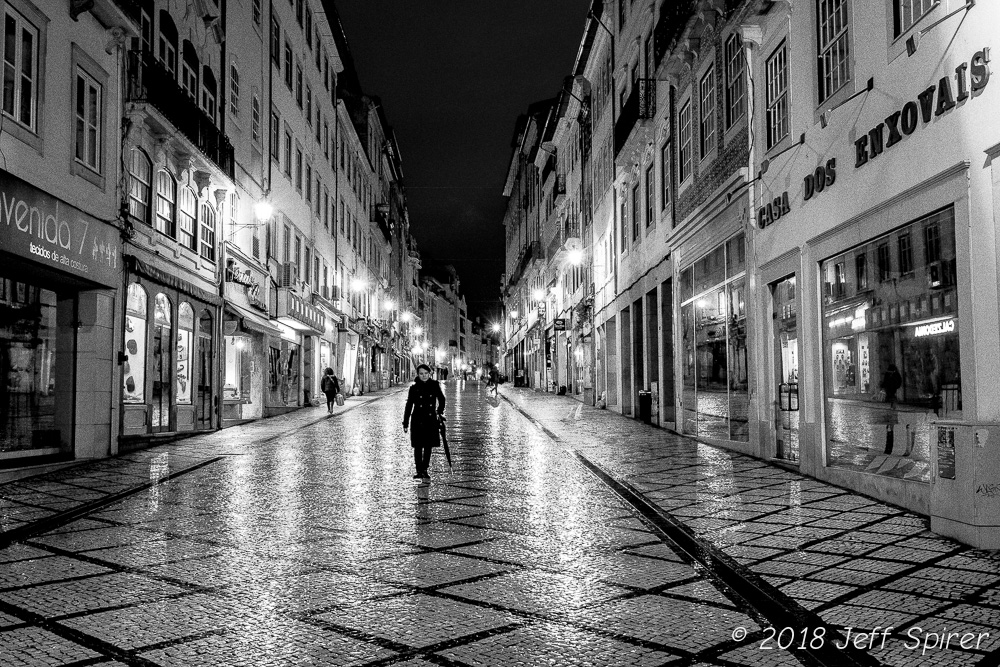 And the old buildings looked alternately elegant and threatening. 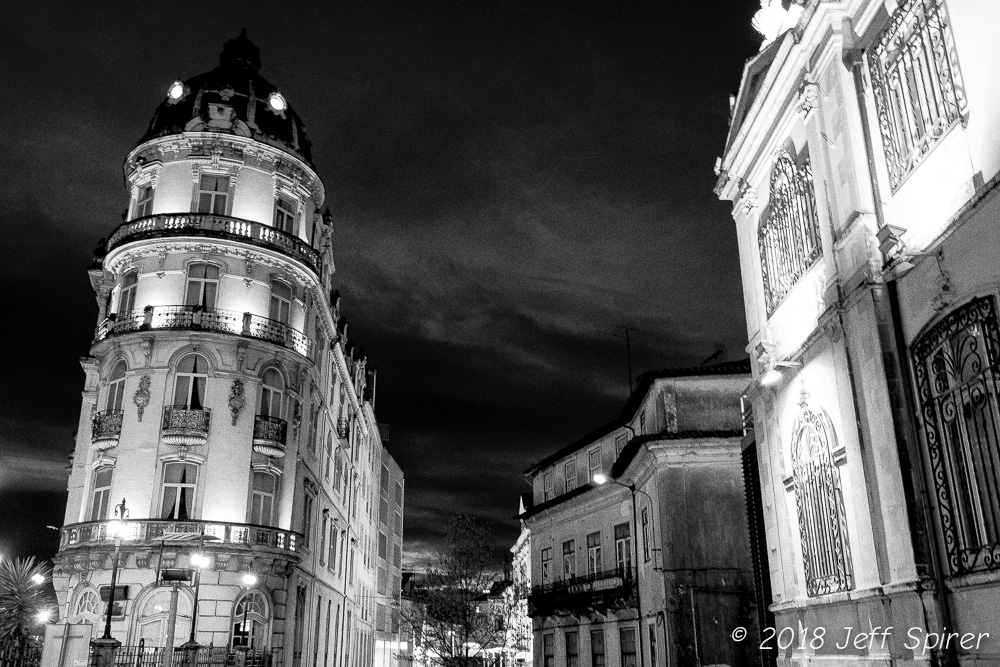 The last half day we wandered the edges of the center. The fringes of the old quarter are filled with abandoned factories, apparently from old industries including ceramics and cookie factories that closed down. A lot of retail space is empty also, victims not of Amazon, which has a very low presence here, but of malls and a migration of the population away from the center. 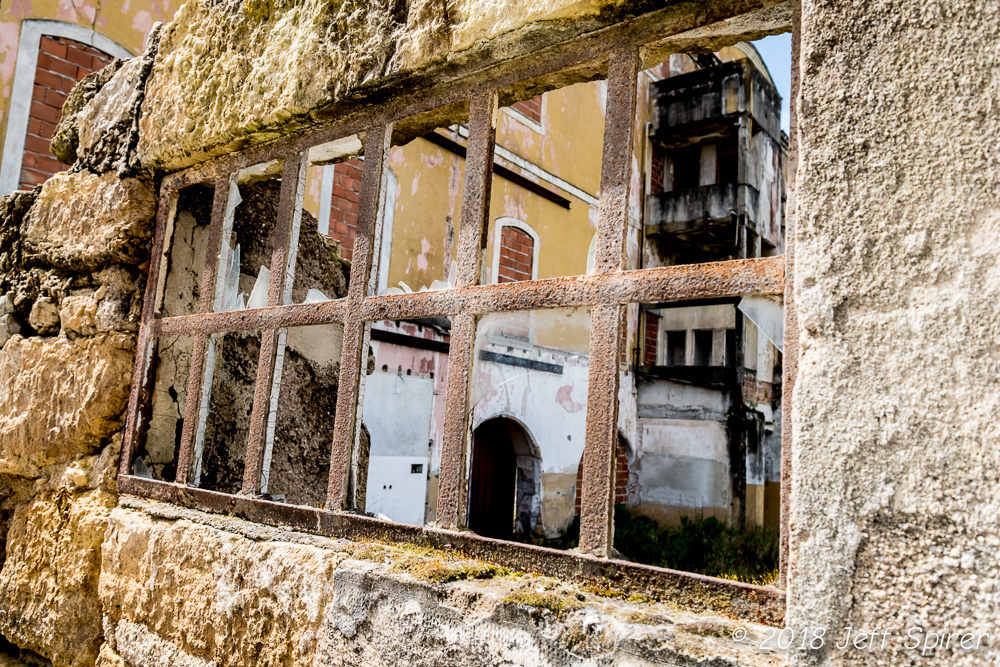 Hopefully I will find a way to photograph inside the library on our next visit.