In an effort to see more of Portugal, we flew to the Azores, a group of islands in the middle of the Atlantic Ocean. There are similarities to Hawaii – a group of volcanic islands of varying sizes and pineapple farms, for example. Unlike Hawaii, the islands aren’t overrun with tourists or partiers. It’s mellow, with a slow pace of life, and the tourists tend to be hikers and whale watchers. We stayed on the biggest island with the biggest city, Ponta Delgada. 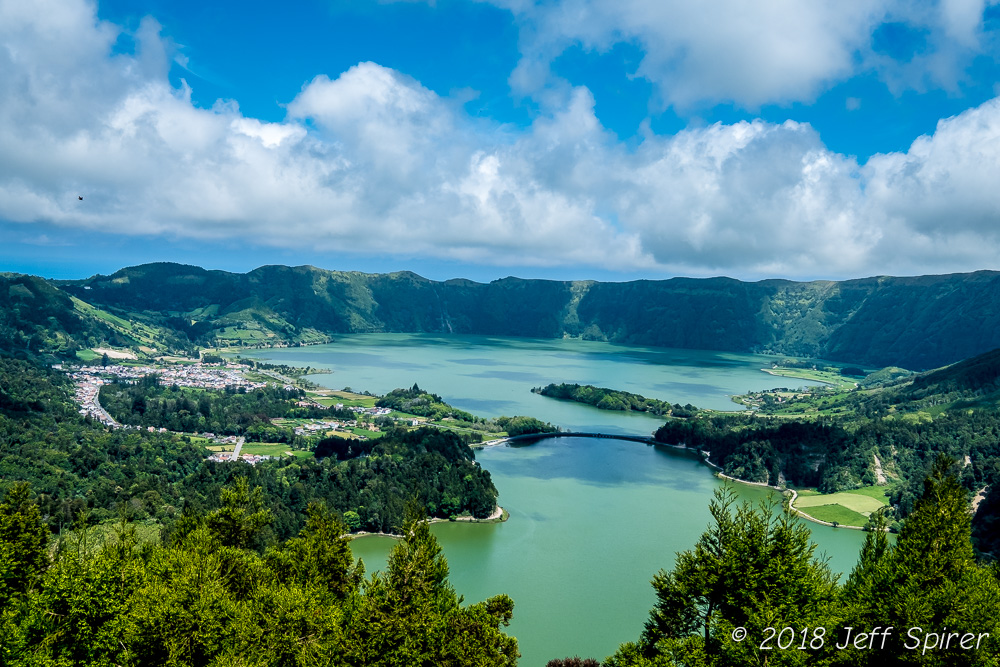 The “big attraction” on Ponta Delgada is a location in the mountains with twin volcanic lakes. The view from the top is spectacular. The light wasn’t great for photography but it doesn’t really matter given how beautiful the location is. 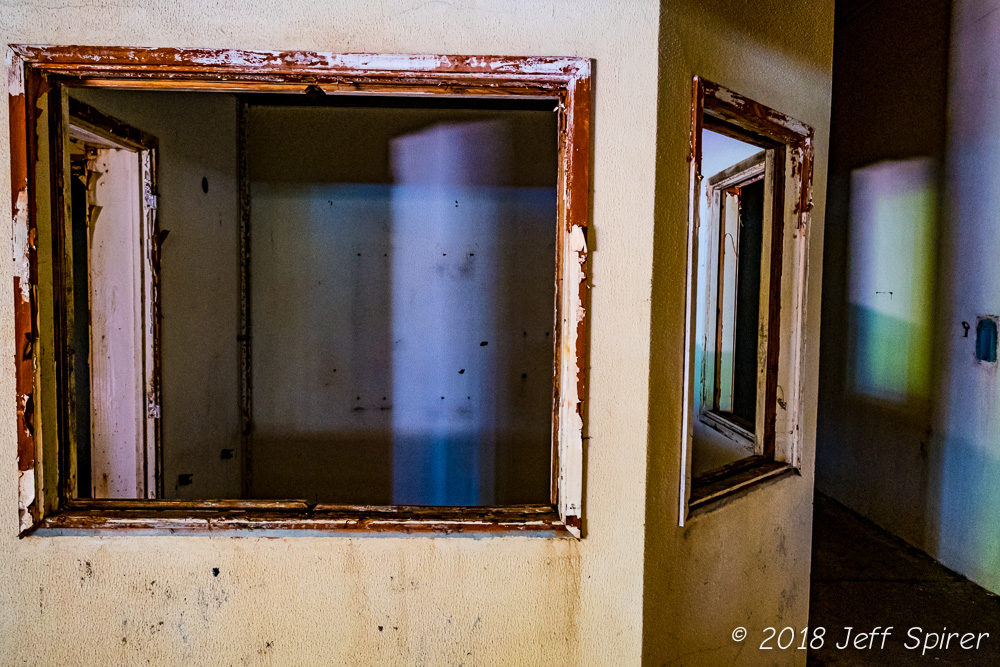 A secondary attraction is the abandoned hotel across the street, the result of a huge mistake years ago when someone thought people would want to stay at one spot across the road from a lookout. Turns out that most people were fine with driving half an hour from the city and being able to go back to restaurants, the waterfront, and a pleasant small city. Although it’s officially off-limits, people do go in and even onto the roof. Not having a good flashlight, I stuck to the ground floor. 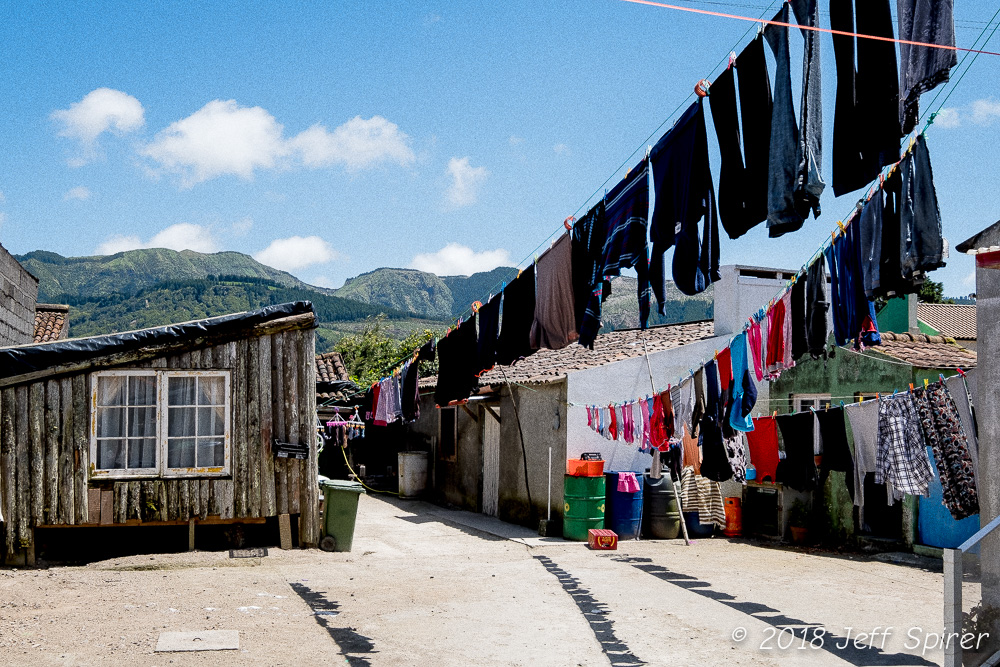 It’s a short drive into the village along the lake. There are a few restaurants, a church, and plenty of places to sit by the lakes. Life was pretty slow in the village except in the restaurant we chose. And the ever-present laundry was hanging outside the homes. While most homes have washing machines, dryers are far more rare. 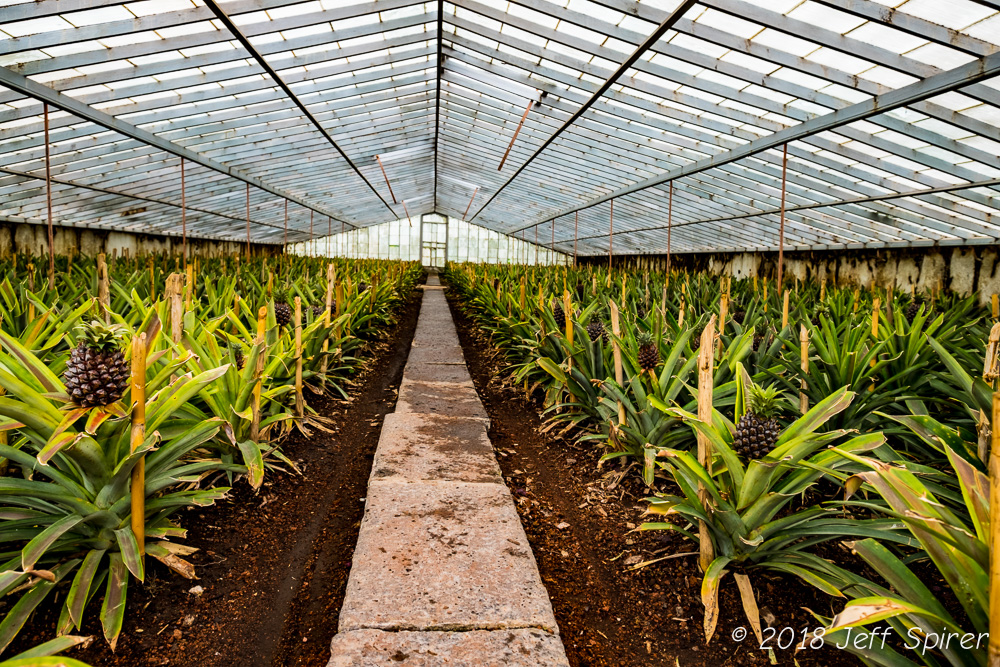 The next day we visited a pineapple farm. Pineapples thrive because of the soil but are grown at a farm in greenhouses due to the weather. They are delicious, and the greenhouses are open to the public. Typical of everything on the island, people are free to wander and just see what’s around. Greenhouses are planted sequentially so there are always pineapples, which means you can see the pineapples at every stage by visiting each greenhouse. 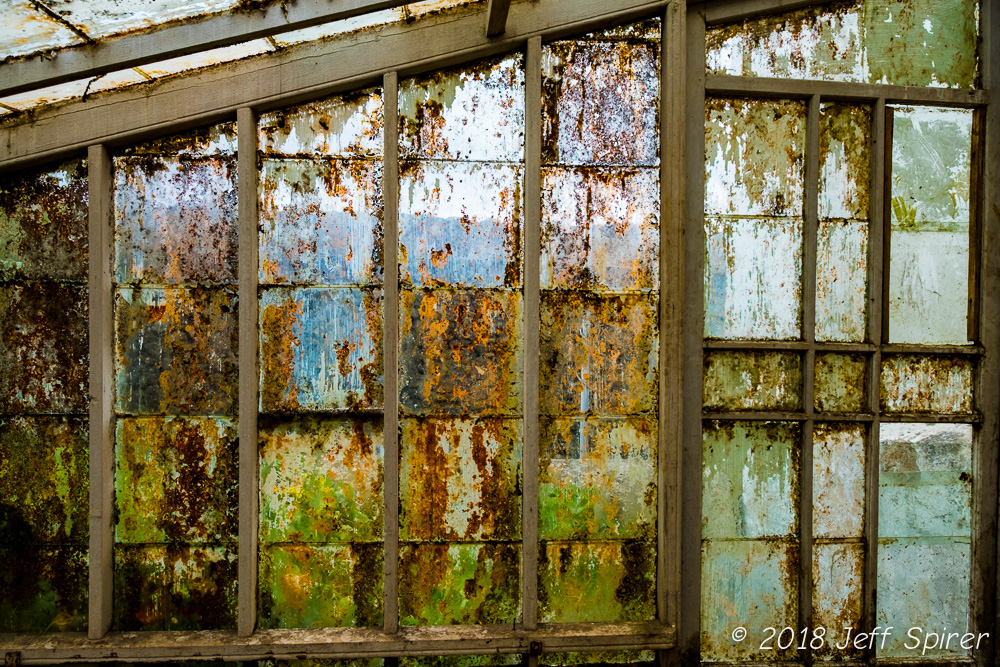 The windows that aren’t used for light turn into art over time. 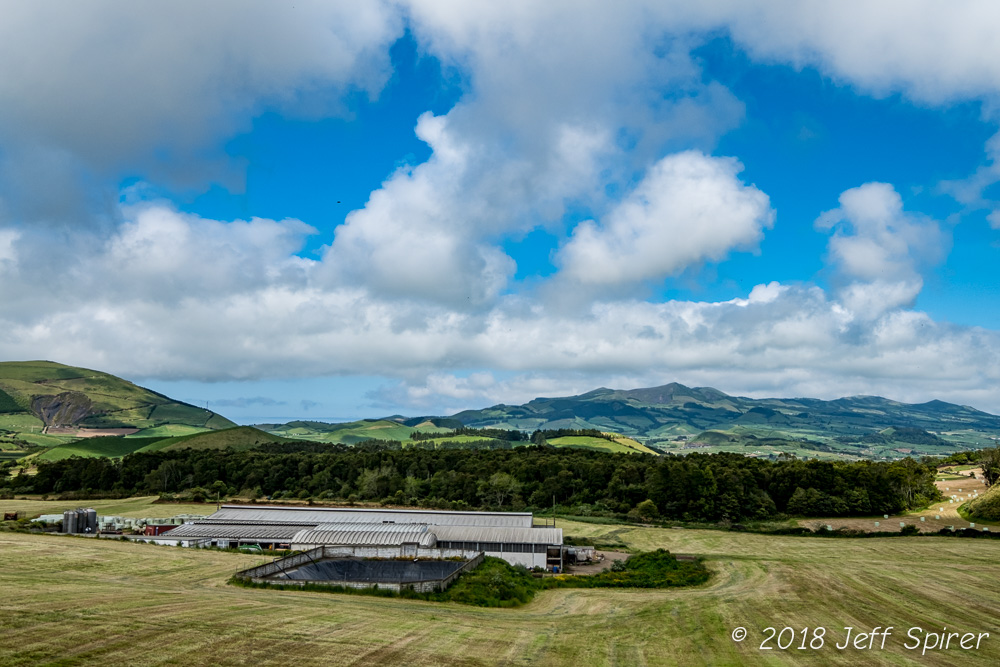 Driving further into the countryside, the spectacular scenery continued. It felt a bit like a theme park in its pristine and simple beauty. 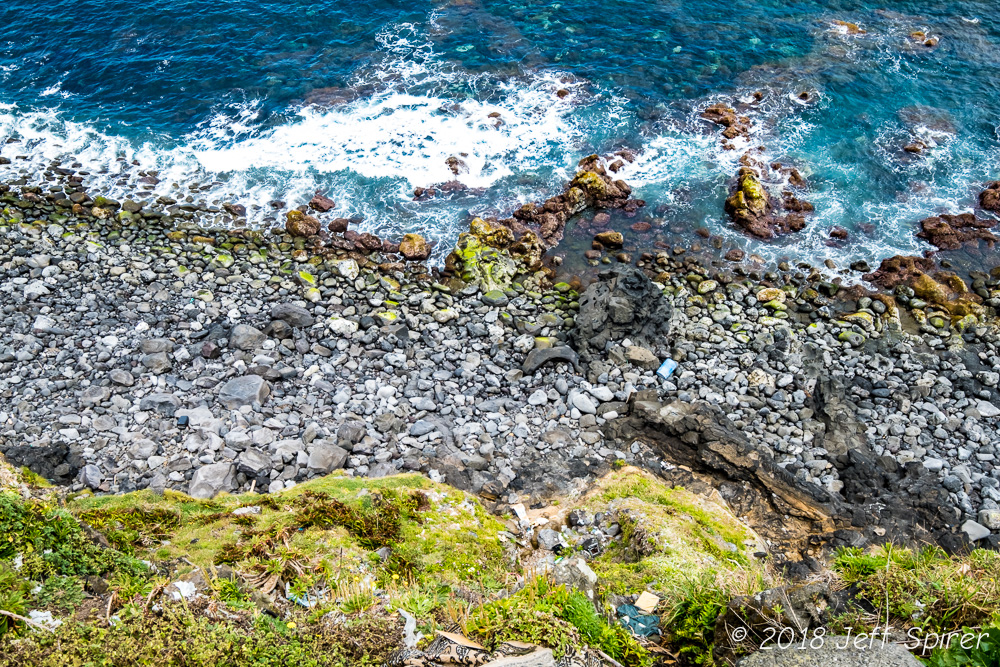 And the ocean is never very far away. Sao Miguel, the island we were visited, is long and narrow, it seems like all roads lead to water. 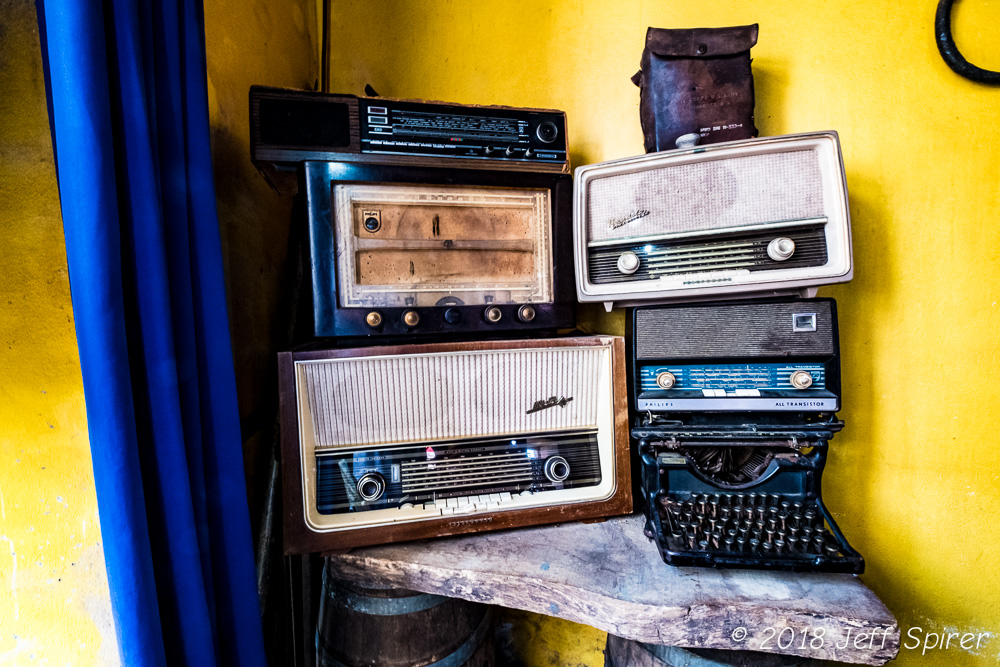 We ate at a small restaurant in a village near the water. The food was excellent – we had  mixed seafood grill that came with fruit and vegetables. There was a terrific display of radios and a typewriter in the corner with no explanation. Great to find art in the back of a restaurant! 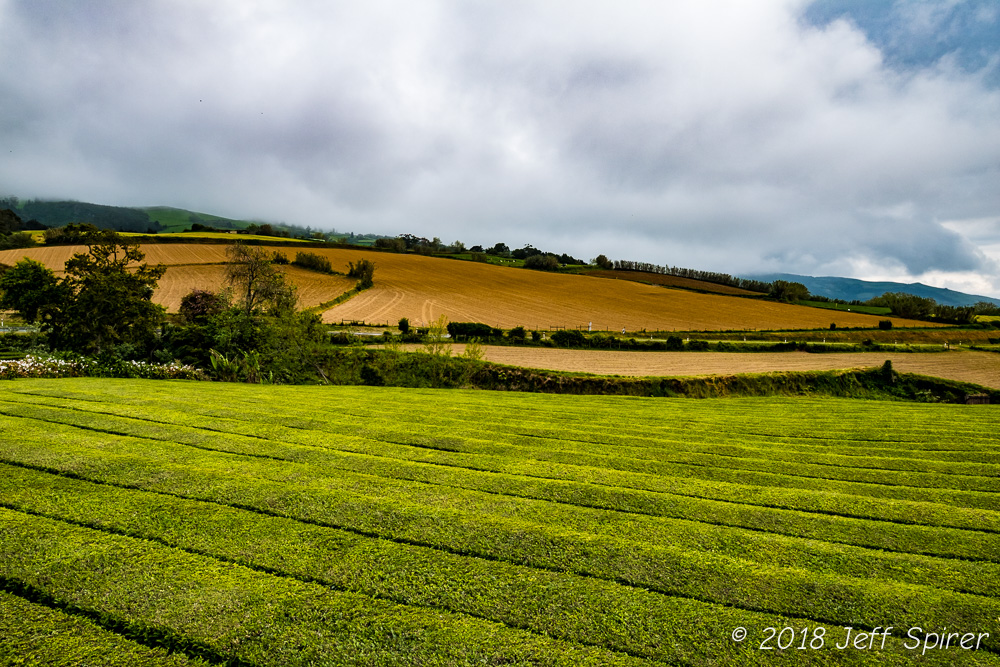 The next day, a tea farm and factory. The Azores are the only place in Europe where tea is grown. The factory is open, complete with machinery that looks at least fifty years old. And you can taste the teas they make. It’s also fine to wander in the tea fields, which look just beautiful. 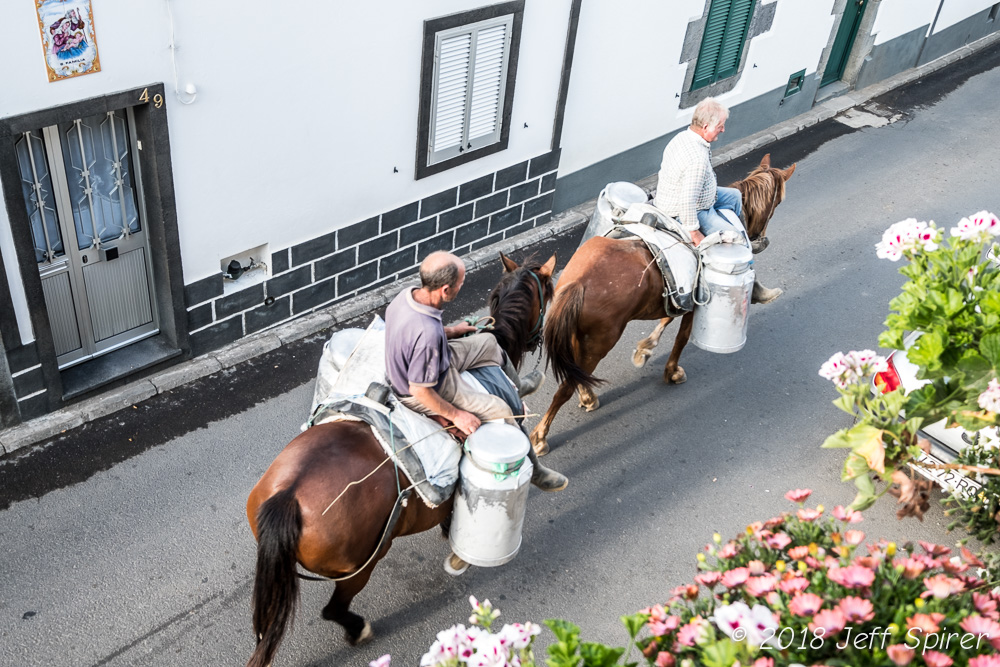 The day trip ended with a meal, of course. We had limpets, a local specialty that is basically a sea snail, and grouper that had been out of the water for only a couple hours. The food was as savory as it sounds but the highlight of the meal came when a couple men came down the street below delivering milk.