Traveling to Setúbal is easy from Lisbon, it’s a 45-minute train ride. The train used is a double-decker that has a silky smooth ride. It’s also inexpensive – two round trip tickets cost us €15. 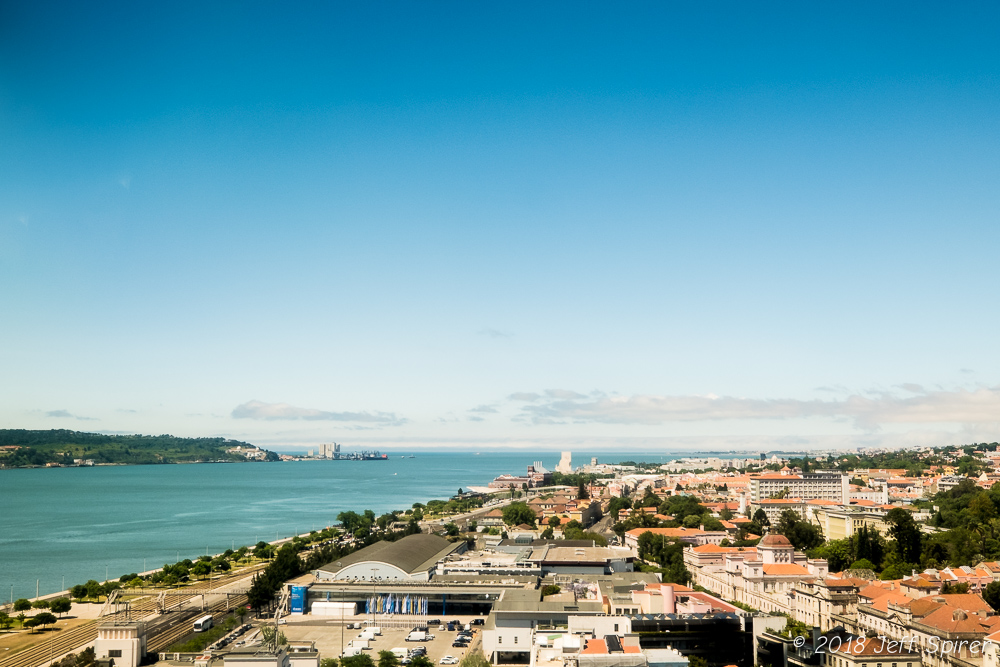 The train crosses the Ponte 25 de Abril, the bridge in Lisbon that looks like a replica of the Golden Gate Bridge. Trains go on the lower level below the cars and is more like a truss bridge, so it’s hard to get a good photo while leaving Lisbon. This is the one shot I was able to take, looking west. 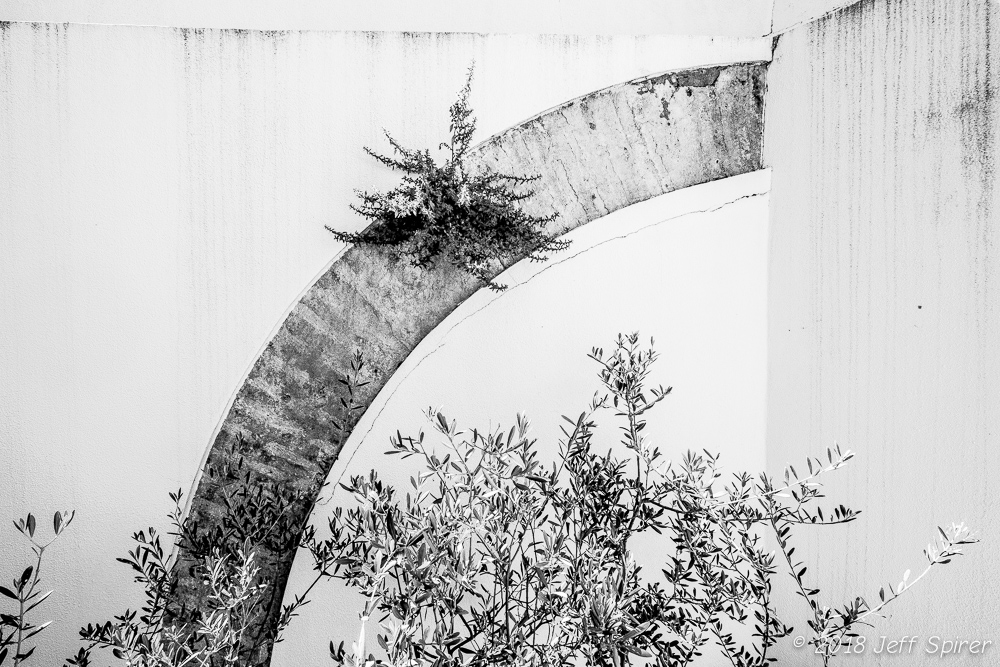 Once in Setúbal, it’s a 15-minute walk to the center of town. Setúbal’s main attractions are the waterfront, a monastery with a museum, the old city, and a big castle on a hill. The monastery turned out to be closed even though the sign said it should be open. Before I moved here, I would find this difficult to understand, but I think the standard explanation, “It’s Portugal,” applies to the inability to enter. We did visit a church which had a delightful courtyard. 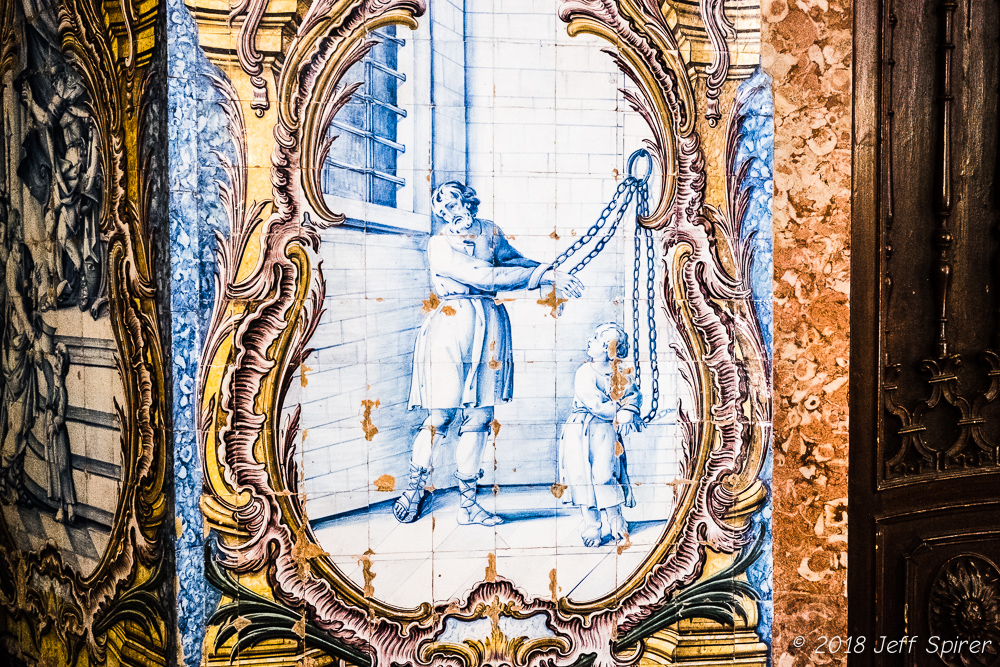 And, as always here, the church has the “pain theme.” Not being Catholic, I don’t get it, but I’m sure it was an inspiration to the Marquis de Sade. 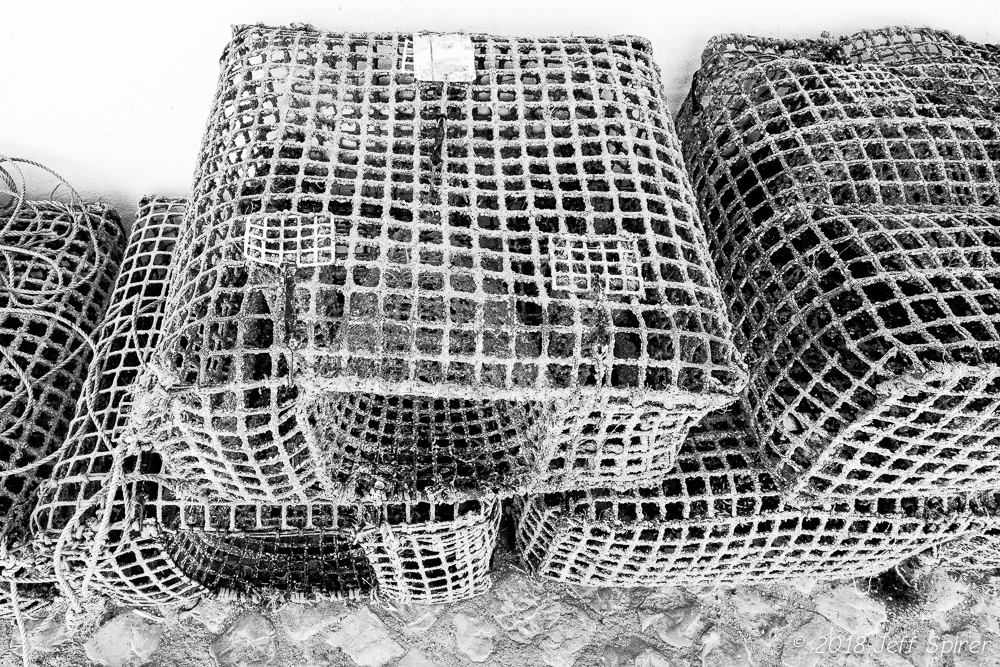 The waterfront is beautiful, with a big marina, fishing boats, fish distribution areas, and a lot of restaurants that might be touristic. We didn’t try any. Fish were visible in the water right at the dock, and men were working on boats. Since we were there mid-day, we didn’t see any of the fishing boats. We did see some fishing equipment though. 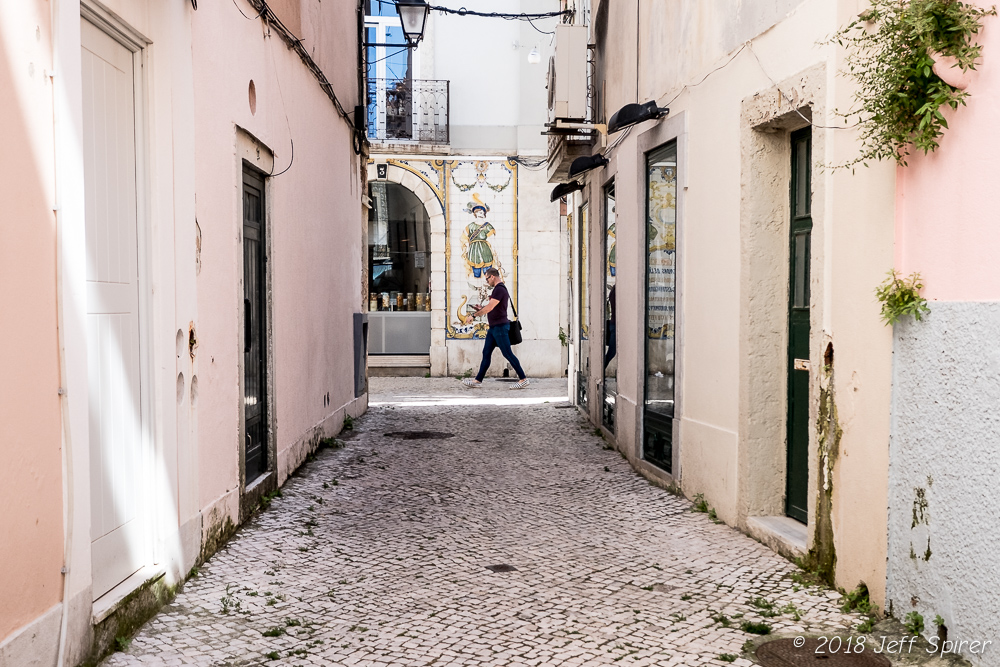 The old city has narrow streets lined with typical Portuguese architecture. There are numerous small shops on the ground floors and apartments above. Although Setúbal contains buildings that have been abandoned, like much of Portugal, there are far fewer derelict buildings in the city center. 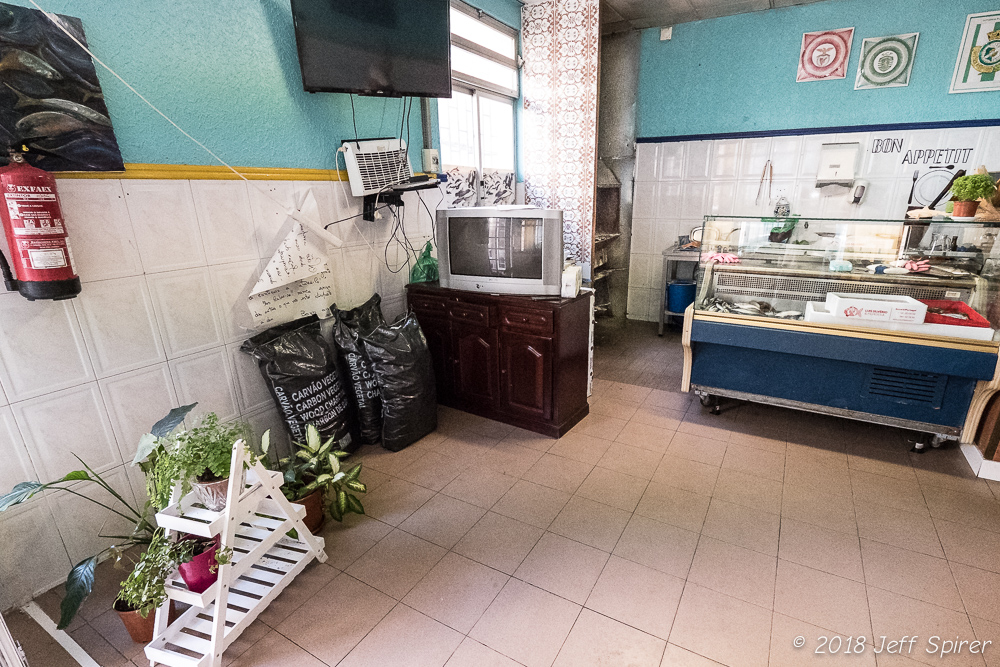 Our initial plan called for eating at the waterfront but hunger took over and before the hangry set in, we found a small place filled with locals. Most tables were long tables with people too busy eating to talk to their neighbors, who probably were the neighbors after they went home. It wasn’t difficult to find out why it was so popular. When we entered, a woman brought us to a case and told us to decide what we wanted to eat. The case contained fresh sardines, a somewhat bigger fish that looked like mackerel, squid, and chocos (cuttlefish), all fresh off the boat. There was a grill in the corner where seafood was cooked. The food was terrific as was the price – for €20, we were served a plate with six grilled sardines, three chocos grilled and served in their ink, sweet potatoes, something resembling bread stuffing, salad, two deserts (walnut gelato), olives and bread, a whole bottle (!) of local white wine, and a bottle of sparkling water. And the people that worked there and spoke English came over and chatted. 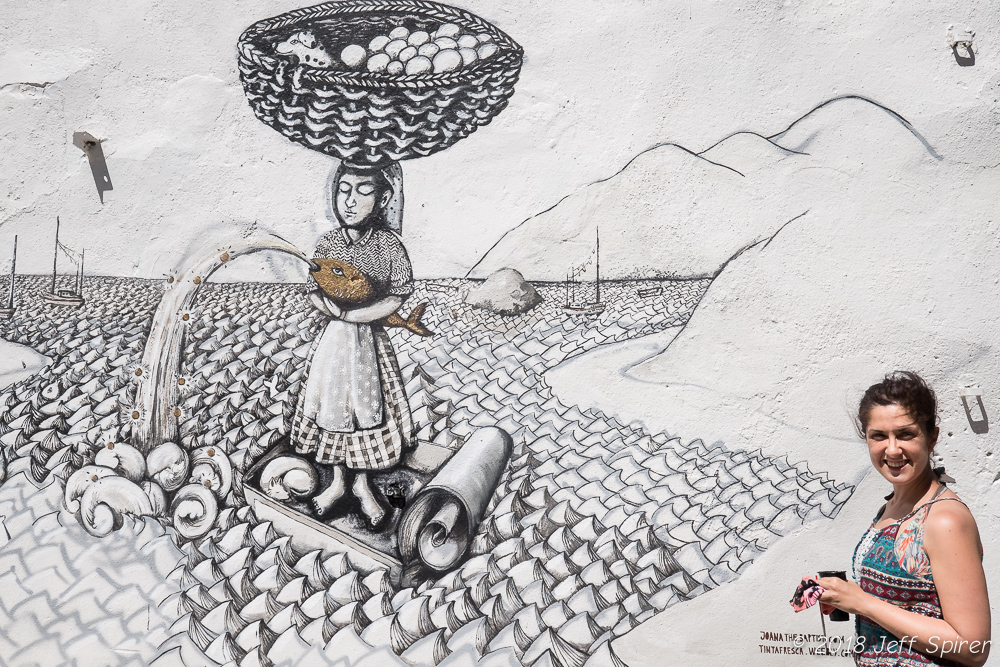 Lots of street art can be seen on the, yes, streets. Some of it is quite sophisticated and some of it is very cartoony. We met a woman who was commissioned to paint on a blank wall, she was a day from finishing and took the time to chat with us about the painting, which has a sea-based theme. 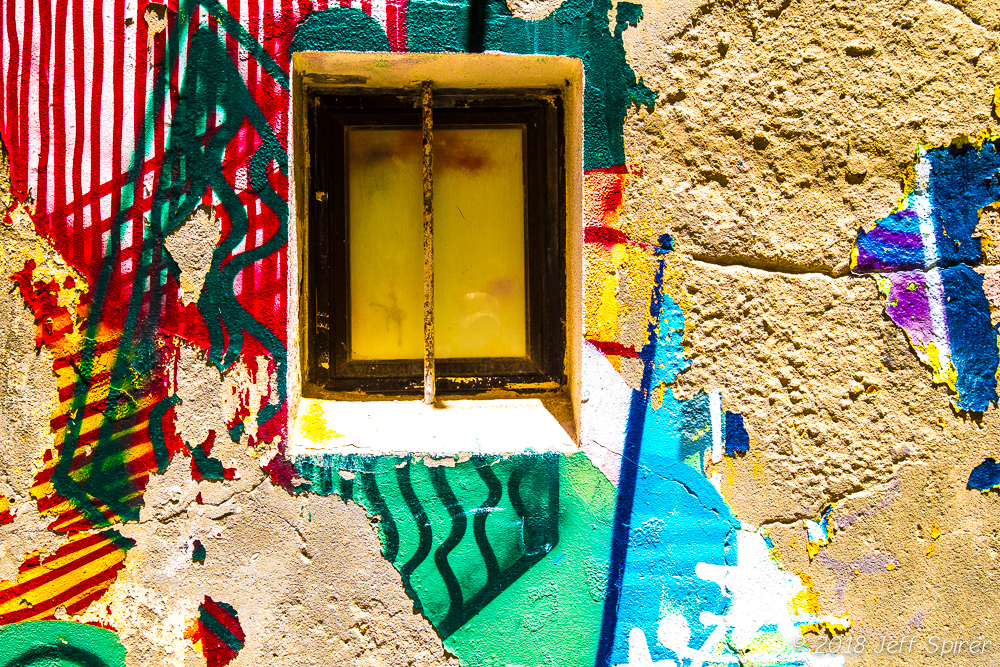 Of course some of the graffiti and art on the abandoned buildings is beautiful in its own right. 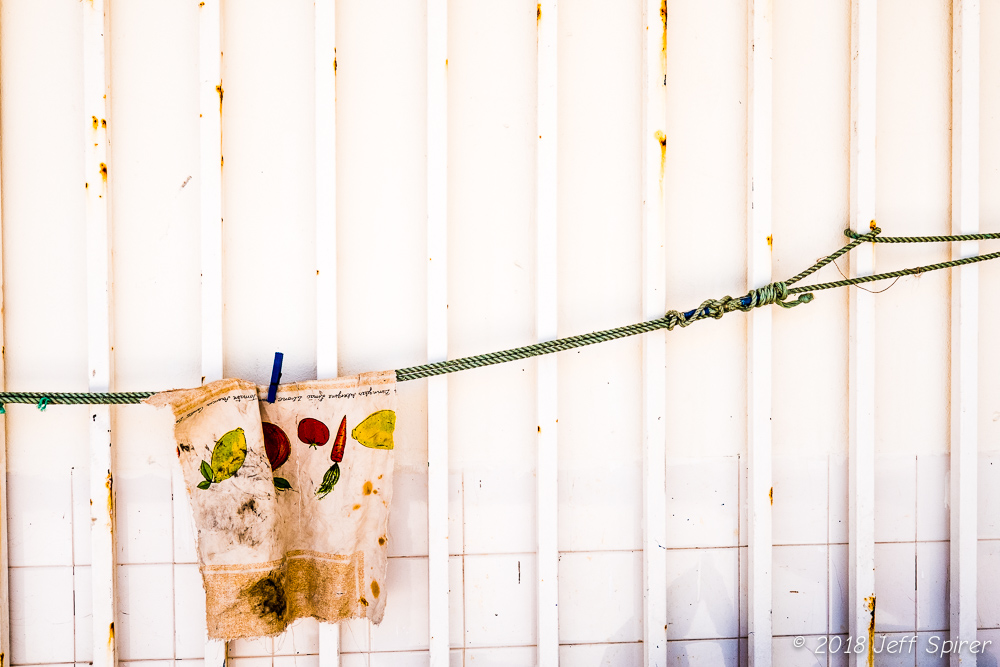 While we did get to see the urban center and the waterfront, we need to return to visit the monastery, the castle, and the vineyards just a few kilometers outside the city.